New York City is in Macy’s DNA. We believe in New York because our 162-year history here reflects the resilience of this city we call home.

The red star at Macy’s Herald Square store has been a familiar beacon for six generations of New Yorkers and millions of visitors from around the world. Macy’s plan to invest in our store and neighborhood celebrates our history in New York and embraces the future we share. We are excited to make this commitment to New York City’s economic recovery from an unprecedented global pandemic and continue to be a part of the city’s success story.

“Macy’s on 34th Street is a cornerstone of Herald Square and has been a vital leader in our push for the neighborhood to realize its full potential for pedestrians, transit users and visitors alike. Macy’s commitment of $235 million to upgrade the public realm reflects our vision for the area and is a bold and timely vote of confidence in the future of Herald Square, our City, and Macy’s ongoing presence here.”
‍
– Dan Biederman, President of the 34th Street Partnership

Note: The renderings on this website are not reflective of the final project. Macy’s is eager to engage with neighbors and community leaders about Herald Square’s future throughout the process.

Our Vision for Herald Square

Since 1902, Macy’s has expanded its presence in Herald Square throughout the years while continuing to be a part of so many New Yorkers’ lives—whether through creating treasured memories through celebrated parades and fireworks, or the store’s superior daily customer service experience.
‍
As the city has adapted and improved over the years, so has Macy’s. The original building that opened more than 100 years ago quickly grew into 1 million square feet of retail space with its 1924 expansion from Broadway to Seventh Avenue along 34th Street. The store grew bigger and even taller in 1931 when it annexed the Seventh Avenue building.
‍
By investing in our Herald Square flagship location and working closely with the community to improve the neighborhood around it, Macy’s is laying the groundwork for a space that will continue to be celebrated as an essential icon in New York City’s future as well as its past.

“Macy’s investment in the Herald Square neighborhood, one of New York City’s most heavily trafficked and visited destinations, is a real marker that the city is set to come roaring back. As an institution with a century-long track record in New York, we commend Macy’s for not only paving a way forward but also for being a great community steward and helping make the Herald Square experience more enjoyable for locals and tourists alike by enhancing the area and offering much-needed transit improvements.”
‍
‍– Melva M. Miller, CEO, Association for a Better New York 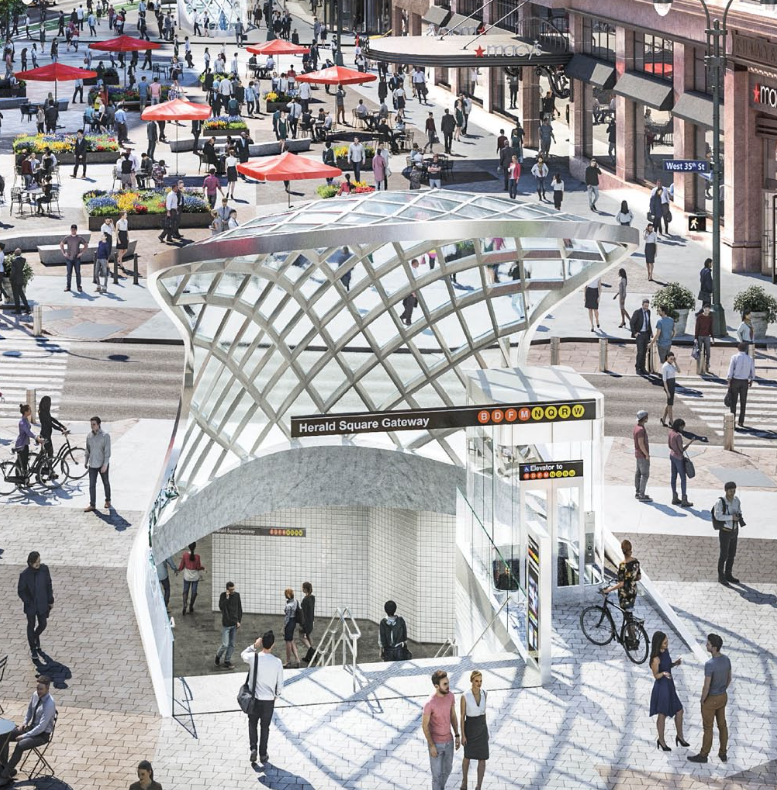 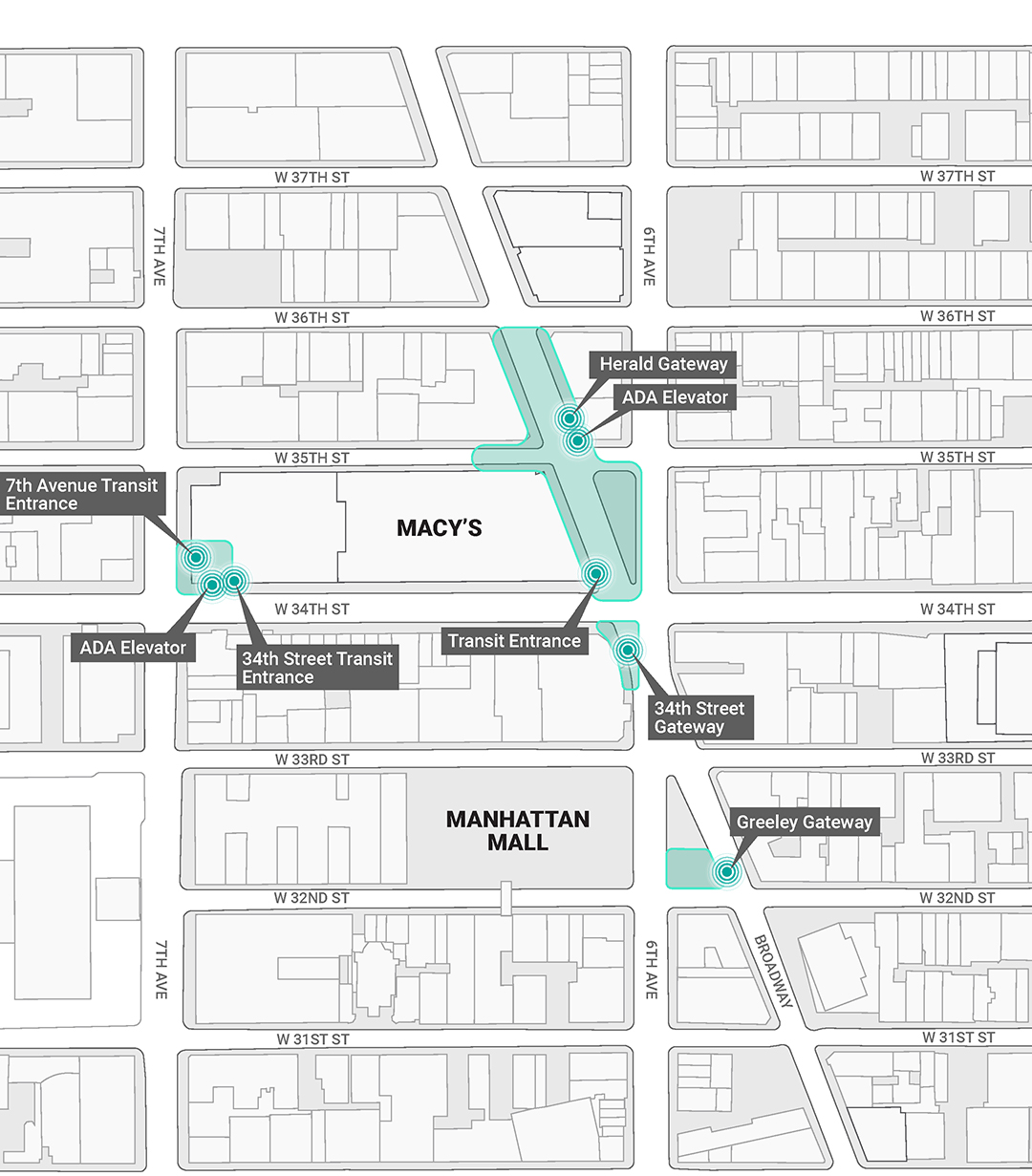 An Investment In Our Shared Future

Macy’s, Inc. has introduced an ambitious redevelopment plan that will bring deep investment and significant upgrades to Herald Square—including approximately $235 million in transit and public realm improvements. The plan would:

The proposal is based on a rezoning that would allow for an additional structure that continues Macy’s tradition of growth and adaptation. The new building on top of the Herald Square location would be an appropriate and fitting addition to Midtown Manhattan that would help bring new economic energy to the entire area. This plan leverages the company’s real estate to secure its future as a New York City institution while also allowing its workforce to continue contributing to the city’s recovery and success.

Overall, the entire proposal, including the significant improvements to Herald Square’s public space and transit infrastructure, would help the district’s economic growth by:

Macy’s is committed to making sure New Yorkers and our neighbors in the Herald Square community are up to date about this project and are a part of our conversations. Please click here to contact us or to sign up for updates about our progress.
‍
Have more questions? Learn more in the FAQ section below.

“RWDSU, the union voice of Macy’s Herald Square employees, supports Macy’s exciting redevelopment project that will bring significant investment to Herald Square. For a lot of people, Macy’s Herald Square represents the retail industry itself, and some of our members have worked for Macy’s for more than 30 years. We commend Macy's for believing in New York and protecting its retail jobs, and for their ambitious project that will make the commutes of our members who use the Herald Square transportation hub a more enjoyable experience. RWDSU looks forward to assisting Macy's in making their vision a reality and encourage our friends in government to move this plan to approval expeditiously.”

What is Macy’s impact on the New York City economy today?  (+)

Why is Macy’s pursuing this project now? (+)

Coming out of a global pandemic that has hit New York City hard, Macy’s reinvestment will secure its position in Herald Square as an ongoing anchor for the neighborhood and affirm its commitment to the district’s economic growth.

Why is Macy’s pursuing an office project given New York’s current commercial vacancy rates and unclear future of work-from-home policies? (+)

Macy's envisions a Herald Square that thrives long beyond New York City's current recovery from the global pandemic. As a leading center of international commerce, New York City is forecasting a significant amount of new office jobs in 2021, expecting a return to pre-pandemic office employment levels by the fourth quarter and recouping office jobs lost at the outset of the pandemic. In addition, improved access to mass transit at this major crossroads for the city will be a significant investment in the future.

How does this affect Macy’s current operations at its Herald Square location? (+)

How is this related to other proposals for development in Midtown Manhattan? (+)

Macy’s proposal for Herald Square is independent of other development proposals and is focused on the area around Herald Square. However, it will complement the ongoing investment in the surrounding area. The various public realm investments will be appropriate to the community and will seamlessly blend with the Metropolitan Transportation Authority’s transit system upgrades.

Does the proposal impact any historic or landmark designations within the community, including the Macy’s store? (+)

Macy’s will continue to celebrate the existing store and building as an essential fixture in New York City’s history as well as the city’s future. The proposal does not impact various classic and celebrated features at the store, including the wooden escalators that pioneered the technology when they were built in the 1920s.

What kind of environmental impact will the additional structure have on the surrounding neighborhood? (+)

Macy’s is looking forward to meeting with our neighbors to discuss and envision Herald Square’s future, including an examination of the proposal’s impact on the community. An environmental impact will be a part of the city’s Uniform Land Use Review Procedure (ULURP) process, and which will incorporate feedback from community members and local leaders.

The proposal’s structure is expected to sit atop the existing building and will be contextually appropriate—the final design has not been finalized. Macy’s will engage the community and local leaders to inform how the project can deliver the vision for a renewed Herald Square. However, the building would add complementary density to the transit-oriented development district envisioned by the project.

What kind of activity will take place in the new building? (+)

How long will the project take to complete?(+)

Macy’s is eager to begin the public review process and to integrate the community’s feedback so that the work surrounding the public space and transit investments can begin. Following both a Draft Scope of Work and Draft Environmental Impact Statement (DEIS) that will both include community input and questions, the proposal will go through the city’s Uniform Land Use Review Procedure (ULURP) process. Macy’s will continue to engage the community and local leaders throughout the ULURP process to inform how the project can best deliver the vision for a renewed Herald Square.

If you have any questions or concerns not addressed on this website, please email us at info@macysrenewingheraldsq.com

Trusted partners must step up for NYC’s recovery to work

Thank you, Macy’s: NYC really needs your fireworks this year

Stay up to date! Learn more about Macy’s vision for Herald Square and our community and sign up for updates.

Thank you! Your submission has been received!
Oops! Something went wrong while submitting the form.

Macy’s values and welcomes your thoughts and input throughout this process. Please feel free to email us at info@macysrenewingheraldsq.com